No-Bake Eggnog Pie is a creamy pie made with vanilla pudding mix, nutmeg, eggnog, rum, and whipped cream that tastes just like a glass of eggnog! If you are now craving the drink, I also have a Blender Eggnog you will love!

Eggnog has been around for hundreds of years, and it is debatable as to when it became a symbol of the holidays. But, here we are, and when I mention eggnog, either people love it or hate it! If you love eggnog, you will definitely love this eggnog pie. And, even if you are not a fan of it, you still might love this creamy, no-back pie! In fact, a few folks that are not a fan of the drink still enjoyed a piece of this pie. Be sure to add it to your Christmas Menu!

Pudding: Look for cook and serve vanilla pudding, not instant.

Nutmeg: Nutmeg is used in the pie filling as well as sprinkled on top of the pie for garnish.

Eggnog: If you don’t have any eggnog on hand, make your own homemade eggnog to use!

Rum: If you don’t have rum, you could also use brandy. Or, simply leave it out if you do not want to add alcohol.

Heavy Cream: The heavy cream will be whipped to fold into the filling. You could also use cool whip. If using a store-bought cool whip, you will need about 4 cups. 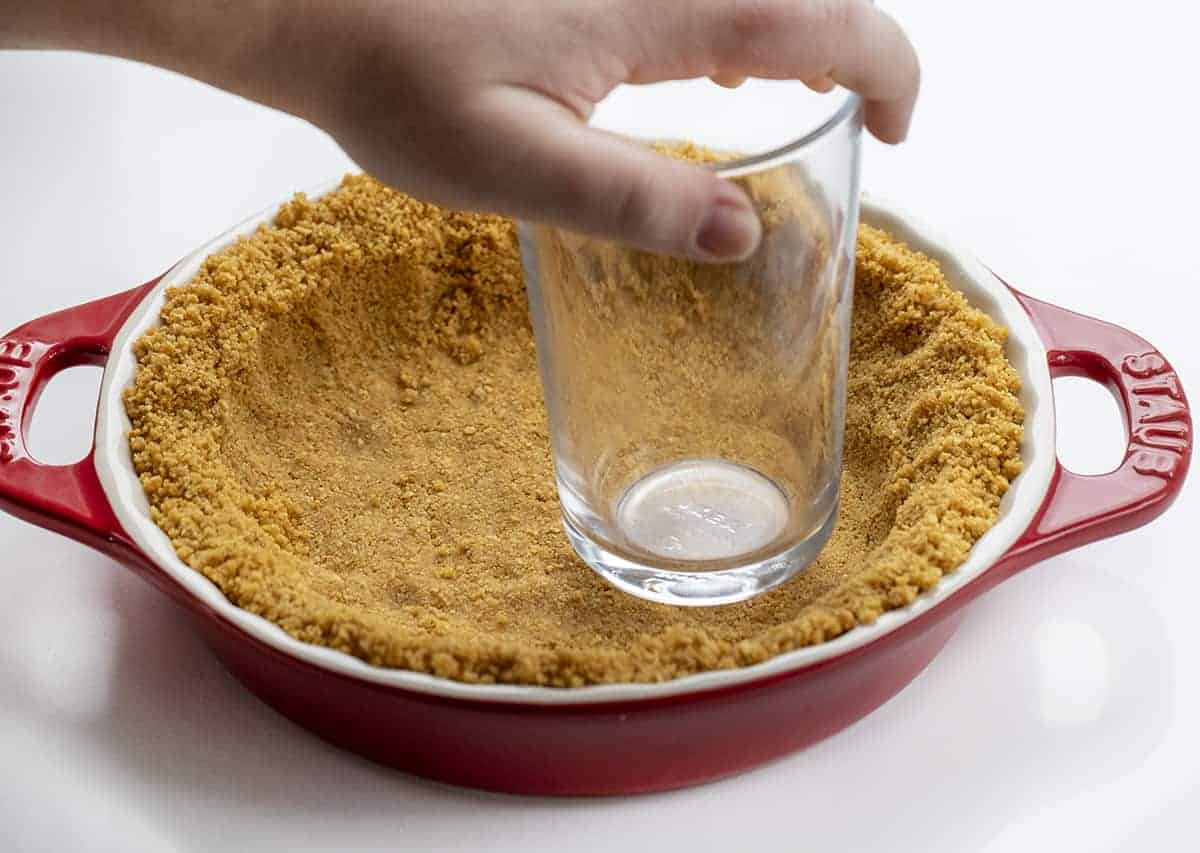 To make the crust, combine the graham cracker crumbs and the butter in a small bowl. Use a fork to mix the two ingredients, making sure that every single graham cracker crumble is coated in butter. The butter binds everything together so bits of crust don’t pop up in the pie. If the crust seems too crumbly, add more melted butter.

Add the graham cracker crust to a 9-inch pie dish. Use your hand to press it flat to the bottom and up the sides. Use a kitchen glass to press the crust even flatter. Set the crust aside as you make the filling. 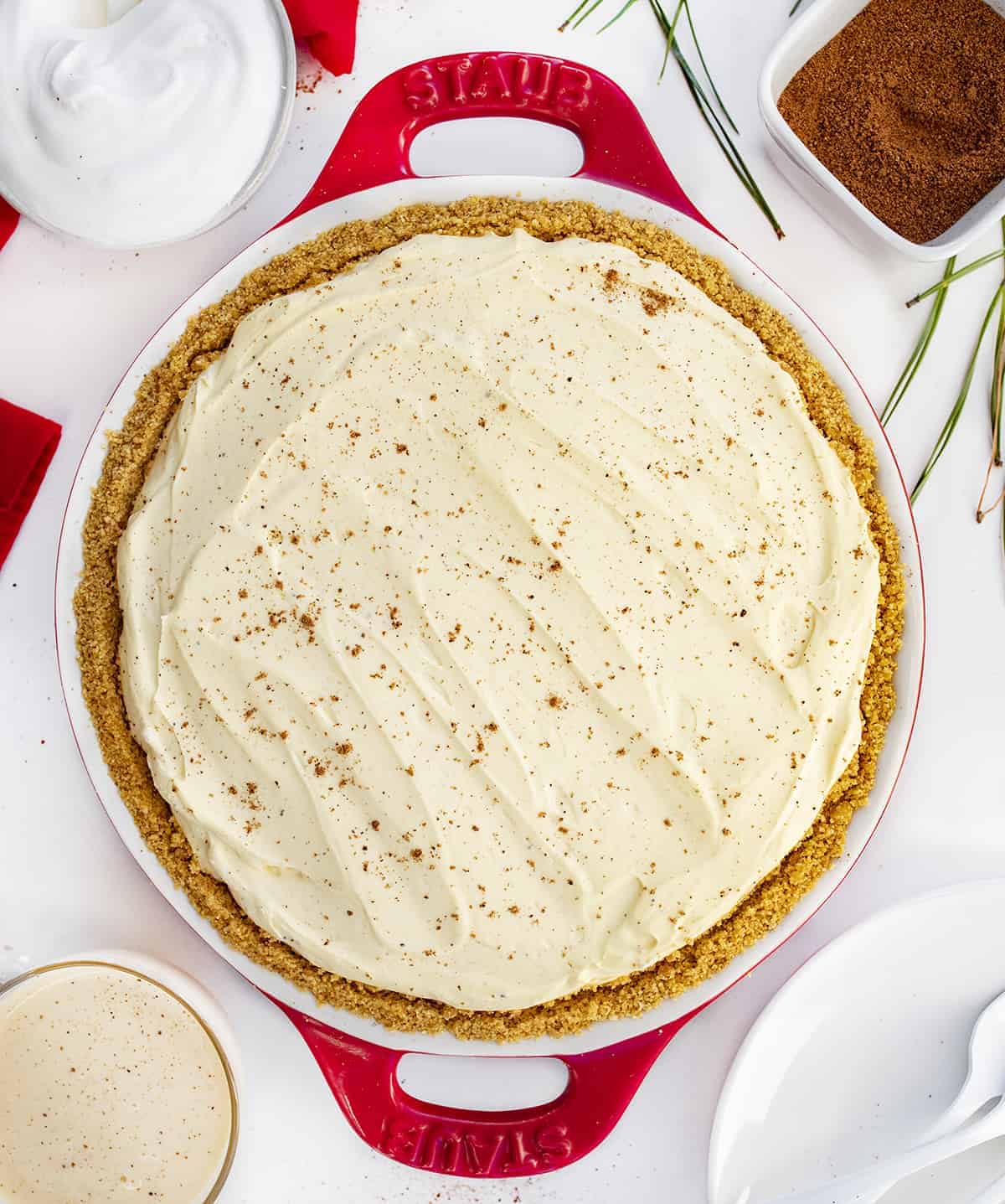 How to Make Eggnog Pie

This is a no-bake pie that does need to chill overnight before serving. The first step is to combine the pudding mix, nutmeg, and eggnog in a saucepan. Mix the ingredients well and cook over medium heat, stirring constantly, until thick. This will take 10-15 minutes (it took me 12 minutes, to be exact).

Remove the pudding mixture from the heat and stir in the rum (if adding). Transfer the mixture to a bowl, cover, and place it into the refrigerator to chill for at least an hour, or until chilled completely.

Meanwhile, make the whipped cream. To make the whipped cream, use a hand mixer to slowly mix the heavy cream until it gets thicker. Be patient; if you crank up the mixing speed too high, be prepared to get sprayed! Eventually, increase the mixer to high speed until stiff peaks are formed. Stiff peaks are sharp peaks that can stand on their own even after the beater has been removed. 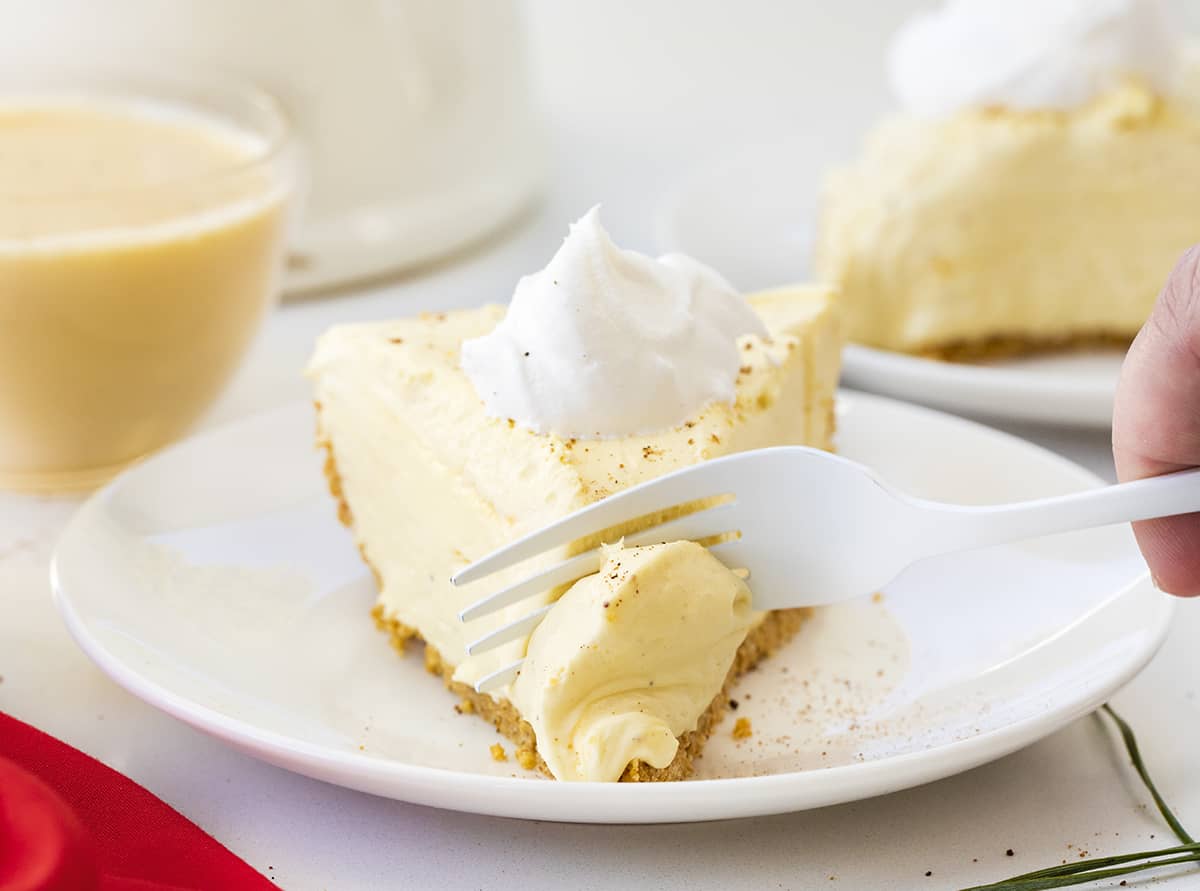 Can I Freeze this Pie?

Yes! This pie is easy to make ahead of time and freeze for later. Simply cover it with plastic wrap and store it in a freezer-safe container for up to 3 months. When ready to enjoy, let it thaw in the refrigerator overnight to devour the next day. 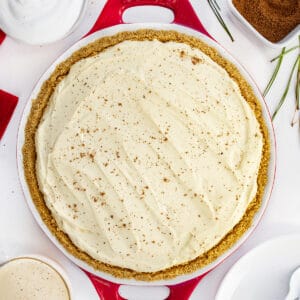 No-Bake Eggnog Pie is a creamy pie made with vanilla pudding mix, nutmeg, eggnog, rum, and whipped cream that tastes just like a glass of eggnog!

Amanda Rettke is the creator of I Am Baker, and the bestselling author of Surprise Inside Cakes: Amazing Cakes for Every Occasion – With a Little Something Extra Inside.Over the course of her 15+ year blogging adventure, she has been featured in and collaborated with the Food Network, New York Times, LA Times, Country Living Magazine, People Magazine, Epicurious, Brides, Romantic Homes, life:beautiful, Publishers Weekly, The Daily Mail, Star Tribune, The Globe and Mail, DailyCandy, YumSugar, The Knot, The Kitchn, and Parade, to name a few.

No comments to show.